The old man as a ‘Bob the Angry Flower’ webcomic

The old man of Hemingway’s novella also appears in a one-page webcomic titled “Bob’s Classic Literature Sequels: The Old Man and the Sea 2.” This webcomic was illustrated by Stephen Notley (b. 1970), a contemporary Canadian cartoonist and the creator of the “Bob the Angry Flower” comic strip. (As an aside, Notley is currently based in Seattle, Washington, and he usually posts a new “Bob the Angry Flower” cartoon to his website http://www.angryflower.com every Friday. Check out his bio here via the Lambiek Comiclopedia.)

Notley’s “Old Man and the Sea 2” contains eight panels and features two characters: an old, dignified, and silent Santiago and Bob the Angry Flower (pictured below), who does all the talking. The webcomic begins with the two characters standing aboard the bow of an enormous ocean liner in the middle of the ocean. Bob the Angry Flower has his arm around Santiago in the first panel and begins the comic thus: “So when I heard about your story I just HAD to come!” Bob then summarizes Santiago’s ordeal and then retells the story of “The Old Man and the Sea” in the second and third panels: “… you went out on the sea, made a supreme effort of mental and physical will, and somehow caught the biggest marlin EVER! AND THEN THE SHARKS ATE IT!!!” (Notes: The reader may access this webcomic here, and all emphasis are in the original.)

After sharing his reaction to Santiago’s ordeal (“I HATE THOSE SHARKS SO MUCH!!!”), Bob refers to Santiago by name (“Well don’t worry Santiago”) and reassures him in the fourth panel that “Bob’s gonna make it all better!” How? Bob the Angry Flower tells Santiago that “this boat’s got every shark-lasering gadget ever made!” in the fourth panel and adds that “we’ve located a marlin four times bigger than the one you caught” in the fifth panel. (All emphasis above in the original.) All Santiago has to do to catch the massive marlin and fend off any possible sharks is to press a button. Bob then urges Santiago in the penultimate panel to “Go for it, man!!! Win it all back!!!” The last panel contains a close-up of Santiago against a black backdrop. Although Stephen Notley’s sequel to OMAS contains only eight panels, it nevertheless captures the quiet dignity and tenacious spirit of Hemingway’s Santiago. He utters not a single word and refuses to hit the button. 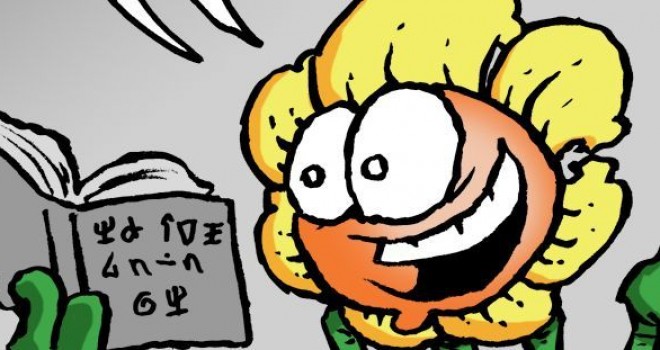