This week marks the 12th anniversary of the terrible events that took place on the morning of 11 Sept. 2001 in the United States … and the 40th anniversary of the terrible events of 11 Sept. 1973 in Chile (see the image below, depicting the moment when Chile’s Presidential Palace was bombed). The Republic of Chile has since become a prosperous constitutional democracy. What has the US government accomplished in the 12 years since 9/11? 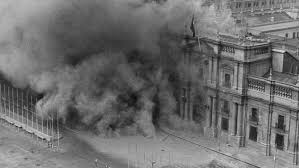 prior probability is also reblogging this thought-provoking post by Robin Hanson at Overcoming Bias:

<< In the decade since 9/11 over half a billion people have died worldwide. A great many choices could have delayed such deaths, including personal choices to smoke less or exercise more, and collective choices like allowing more immigration * * * Yet, to show solidarity with these three thousand victims, we have pissed away three trillion dollars ($1 billion per victim), and trashed long-standing legal principles. And now we’ll waste a day remembering them, instead of thinking seriously about how to save billions of others. I would rather we just forgot 9/11  * * * >>

Is Hanson right? Shouldn’t we just forget 9/11, just like we have forgotten Pearl Harbor (1941) or the Boston Massacre (1770)? Are we being self-righteous (and defeatist), in addition to committing the fallacy of ignoring sunk costs, when we memorialize the events of 9/11?

When I’m not blogging, I am a business law professor at the University of Central Florida.
View all posts by F. E. Guerra-Pujol →
This entry was posted in Uncategorized and tagged 9/11. Bookmark the permalink.

Leave a Reply to The Professor's Wife Cancel reply