Review of “David and Goliath”

A lot of envious academics and various haters (here is one egregious example) have been critical of Malcolm Gladwell’s lastest work David and Goliath.  prior probability, however, loved it. Here’s why:

1. First and foremost, Gladwell is a great writer. True, his stories are purely anecdotal, but they are compelling and fun to read.

2. Also, Gladwell is willing to admit his mistakes. He concedes, for example, on pages 286-287 of his latest book that his previous progressive views on affirmative action were wrong. (Interestingly, however, his admission of error is buried deep in a footnote at the back of his book.)

3. His conclusions are often provocative and counter-intuitive but always well-reasoned, such as his point that too much criminal punishment can actually lead to an increase in the rate of crime!

But despite these positives, there is one big hole in Gladwell’s book–a major internal contradiction. On the one hand, Gladwell argues that too much criminal punishment (such as California’s Three Strikes Law) is bad because many criminals are also fathers. Gladwell’s argument, in essence, is that hard time deprives children of their fathers, and these fatherless children themselves then become criminals.

But on the other hand, Gladwell also claims that many great men (like doctor Jay Freireich, whose medical research has saved countless lives) have made great contributions to society precisely because they didn’t have a father. Gladwell’s logic here is that, in some cases, the deprivation of not having the love and affection of a father creates a level of “desirable difficulty” that can cause some fatherless children to strive more and work harder.

So, why don’t these two effects of “bad” and “good” kinds of deprivation just cancel each other out? Alas, Gladwell never gives us a straight answer.

Does this mean we can expect a “sequel” to David and Goliath? 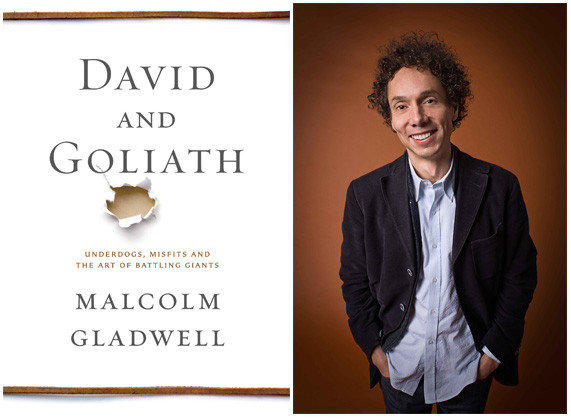 When I’m not blogging, I am a business law professor at the University of Central Florida.
View all posts by F. E. Guerra-Pujol →
This entry was posted in Uncategorized and tagged David and Goliath, Malcolm Gladwell. Bookmark the permalink.