The superfluous legal doctrine of consideration?

Note: This is the third of a series of blog posts in which we review Nate Oman’s new book The Dignity of Commerce: Markets and the Moral Foundation of Contract Law.

As we mentioned in a previous post, Part I of Nate Oman’s book on “The Dignity of Commerce” considers the close relationship between markets and morality, while Part II surveys such specific areas of contract law as the doctrine of consideration, remedies for breach, and contracts of adhesion (i.e. boilerplate contracts). Here, we review Oman’s chapter on the doctrine of consideration, which we consider (pun intended) to be one of the best chapters in the book.

In brief, not all solemn promises are legally enforceable. To be legally binding, a promise must be supported by “bargained-for consideration” on both sides of the agreement. In practice, this means that the contracting parties must both give up something of value, or in the words of Professor Oman: “[legally-binding] contracts consist of promises made as part of a quid pro quo” (p. 90). By way of example, the immortal contract at the center of Shakespeare’s Merchant of Venice provides a textbook illustration of the common law doctrine of mutual bargained-for consideration. Shylock agrees to loan 3000 ducats to Bassanio in exchange for the legal right to take a pound of Antonio’s flesh in the event the loan is not repaid, while for his part Antonio gives up the legal right to a pound of his flesh in exchange for the loan. In other words: Shylock and Antonio both gave up something of value when they entered into their agreement, so their perverse promises are supported by bargained-for consideration and should thus be legally binding if the other elements of the common law are met, i.e. mutual assent, mental capacity, and lawful purpose.

But as Professor Oman correctly notes, the consideration requirement creates practical conundrums when people want to make gifts, when they want to modify an existing agreement, or when they want to make option contracts. After all, where is the quid pro quo or mutual bargained-for exchange in these cases? Professor Oman’s solution to this problem, however, is simple and elegant: “In place of the doctrine of consideration as it now stands, I propose a two-part rule. First, all promises in furtherance of commercial activity should be presumptively enforceable. Second, bargained-for promises outside of the context of an established market should [also] be presumptively enforceable” (p. 100). In other words, what should matter is not whether a promise is part of a quid pro quo but whether the promise promotes commerce and voluntary trade. So, although Prof. Oman frames his solution as a two-part rule, logically speaking his solution really consists of the following simple rule: all promises should be presumptively enforceable. Why “all” promises? And why “presumptively”? Presumptively because the other legal requirements of a contract must still be met (see image below), and all because most if not all promises either support existing markets or help to create new markets, and as Oman persuasively argues in Part I of his book, markets, in turn, are normatively desirable because they more effectively promote other-regarding behavior than other morality distribution channels do. 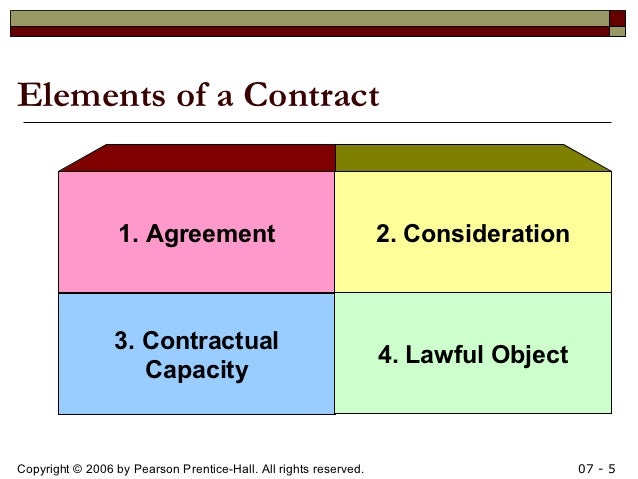 When I’m not blogging, I am a business law professor at the University of Central Florida.
View all posts by F. E. Guerra-Pujol →
This entry was posted in Economics, Ethics, Law, Literature. Bookmark the permalink.

2 Responses to The superfluous legal doctrine of consideration?