Nozick introduces his “Wilt Chamberlain Argument” on pp. 160-164 to show why most pattern-based or end-state distributions are unstable. The argument is not only simple and intuitive; it also shows why massive amounts of inequality can be consistent with justice. In summary, the argument goes like this: 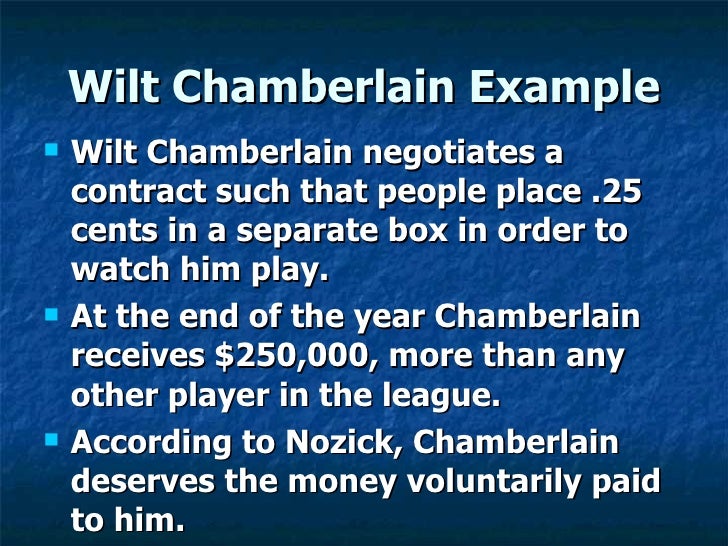 I must confess that I was flabbergasted when I first saw this famous example so many years ago. For starters, I liked Nozick’s willingness to use an example from popular culture. (Here was a Harvard philosopher who knew a thing or two about sports!) But even more importantly, I thought that Nozick’s Wilt Chamberlain Argument was (is) irrefutable. After all, if enough people freely want to pay an extra amount of their money to see their favorite player, shouldn’t the player be able to keep that money? Nevertheless, there is a possible flaw with Nozick’s argument. What if the team decides to breach its contract with Wilt Chamberlain? In that case, Chamberlain could resort to self-help (not play the following season unless he is paid), or he could sue his team in a court of law to enforce his contract (unless the contract has an arbitration clause!). Yet courts are expensive to operate, and the set of rules under the rubric of contract law (whether based on model legislation like the UCC or common law principles) doesn’t just arise out of thin air. Isn’t it just, then, that Wilt Chamberlain be required to pay for this legal infrastructure out of his earnings? Moreover, doesn’t Wilt Chamberlain have a moral duty to share some fraction of his earnings (via charity, not taxes) with some less fortunate souls, say poor kids who would like to play basketball?

1 Response to The Wilt Chamberlain Argument