The logic of Robin Hood (review of Atlas Shrugged, part 1)

Is Robin Hood a good guy or a bad guy? Our previous post identified three original ideas in Atlas Shrugged. One of these is Ayn Rand’s revisionist critique of Robin Hood, the legendary outlaw who robbed from the rich and gave to the poor. This counter-intuitive critique appears on pp. 532-533 of this monumental tome (all page references are to the 35th anniversary edition of Atlas Shrugged, the one with an Introduction by Leonard Peikoff), or about halfway into the novel, where one of the secondary characters in the novel (the Norwegian pirate Ragnar Danneskjöld) questions the moral ideal of Robin Hood, describing him as “the most immoral and the most contemptible” anti-hero. (By the way, we begin our review of Atlas Shrugged with the Robin Hood passage because the idea expressed in this passage is central to the main thesis of the novel: government regulators are “looters” who use coercion–regulation, fees, taxes, etc.–to extort wealth from the producing class–businessmen, corporations, and self-made tycoons–to entrench their own bureaucratic positions of power.) So, without further ado, here are the words of Ayn Rand’s alter ego Ragnar Danneskjöld:

It is said that [Robin Hood] fought against the looting rulers and returned the loot to those who had been robbed, but that is not the meaning of the legend which has survived. He is remembered, not as a champion of property, but as a champion of need, not as a defender of the robbed, but as a provider of the poor. He is held to be the first man who assumed a halo of virtue by practicing charity with wealth which he did not own, by giving away goods which he had not produced, by making others pay for the luxury of his pity. He is the man who became the symbol of the idea that need, not achievement, is the source of rights, that we don’t have to produce, only to want, that the earned does not belong to us, but the unearned does. He became a justification for every mediocrity who, unable to make his own living, has demanded the power to dispose of the property of his betters, by proclaiming his willingness to devote his life to his inferiors at the price of robbing his superiors. *** Until men learn that of all human symbols, Robin Hood is the most immoral and the most contemptible, there will be no justice on earth and no way for mankind to survive.

This counter-intuitive or revisionist claim is based on Robin Hood’s motives. According to the passage quoted above, Robin Hood is a bad guy to the extent he was motivated by needs of the poor (redistribution of wealth) and not by the defense of their rights. Nevertheless, while we appreciate the importance of motives in the domain of ethics, one of the supreme ironies of Ragnar Danneskjöld’s critique of Robin Hood is that the behind-the-scenes actions of the character who utters it can themselves be compared to the actions of the original Robin Hood! For Ragnar Danneskjöld is a pirate/privateer who seizes “loot carriers”–vessels with humanitarian cargoes paid for with taxpayers’ money and sent by order of the Bureau of Global Relief. In other words, Ragnar, like the original Robin Hood, is someone who steals from the “looters.” Moreover, motives aside, Robin Hood could just as easily be described as an Hernando-de-Soto-style defender of property rights (i.e. the informal property rights of the poor), since he is returning to the poor the property that is rightfully theirs. A further irony is that when Ragnar himself attempts to explain and defend his actions to Hank Rearden on page 533 of Atlas (Part 2, Ch. VII), he describes himself as a kind of Robin Hood: “What I actually am, Mr. Rearden, is a policeman. It is a policeman’s duty to protect men from criminals–criminals being those who seize wealth by force. *** But when robbery becomes the purpose of the law, then it is an outlaw who has to become a policeman.” 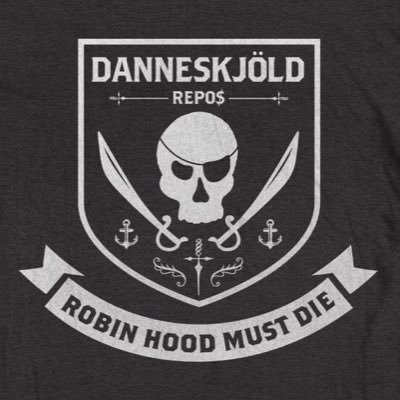 6 Responses to The logic of Robin Hood (review of Atlas Shrugged, part 1)