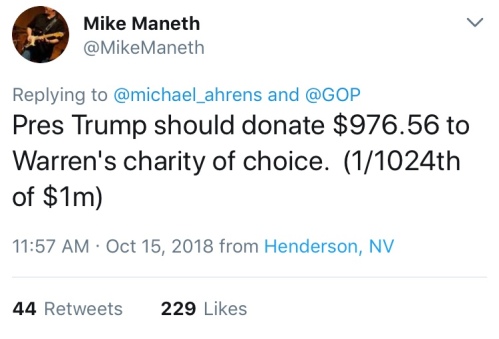 Just kidding! But we love the ingenious idea proposed by Mike Maneth (see above). Yes, President Donald J. Trump promised at a campaign rally to pay $1 million to a charity of Senator Elizabeth Warren’s choice if she could prove her Native American ancestry, but now, based on a recent DNA test, Senator Warren claims to have a remote Indian ancestor dating back many generations ago. (Six to ten generations ago, to be more precise. The full DNA report, via The Boston Globe, is available here.) To put this immense generational range into perspective, one has over 1000 ancestors if one goes back ten generations, or as The Globe itself notes, the Senator is at most between 1/64th and 1/1,024th Native American!