Check out this fascinating report by Michael P. Regan (hat tip: Drudge) about the Jamaica Stock Exchange (JSE), the world’s best-performing stock market. Here is an excerpt: “Jamaican stocks have surged almost 300 percent [over the past five years], more than quadrupling the next-best-performing national benchmark and septupling the S&P 500’s advance…. What explains these gains? A Caribbean economic miracle the world has overlooked? Not exactly: Real growth in Jamaica has averaged less than 1 percent the past four years, and it’s expected to come in at 1.7 percent for 2018. The bull market is partly a matter of math. It doesn’t take much investment to make a tiny market boom, and the total value of the 37 stocks in the main Jamaica index is less than $11 billion, smaller than the valuation of Chipotle Mexican Grill Inc. But it’s also a story about Kingston’s nascent attempts to reinvent itself as a financial hub, even as it works to reduce the heavy debt load that brought the country to the brink of crisis a decade ago.” 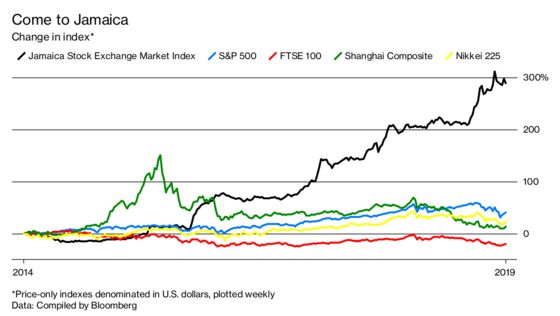 1 Response to Boom or bubble?