A Coasean critique of rights-talk (review of Chapter VIII, part 1)

We now proceed to Chapter VIII of “Natural Law and Natural Rights.” Among other things, Professor Finnis revisits W. N. Hohfeld’s classic taxonomy of rights (see pp. 199-205), delves into the history of the language of rights (pp. 206-210), and even scrutinizes the finer points of the Universal Declaration of Human Rights (pp. 211-218). In the course of this erudite exploration of the logic and history of rights, Finnis makes a number of insightful observations, but Professor Finnis’s “specification of rights” in the last part of Chapter VIII (pp. 218-226) is unsatisfactory, to put it mildly. Why? Because Finnis is operating under the fundamental or axiomatic assumptions that “there are absolute human rights” (p. 225) and that “the maintenance of human rights is a fundamental component of the common good” (p, 218). But these axioms invite certain questions that Finnis himself refuses to answer. What are these absolute rights? How do we define the “common good”? Rather than rehash these difficult questions here (trust me, we will return to them later), I shall instead present a general critique of rights-talk, a critique that I have made many times before (see here and here, for example). My critique is inspired by the work of one of my intellectual heroes, the late economist Ronald H. Coase (pictured below). In particular, in the first few pages of an obscure paper titled “The problem of social cost” (1960), Professor Coase made one of the most intriguing and counter-intuitive observations that I have ever encountered. (If you want to read those first few pages for yourself, Coase’s classic paper is available here.) I shall therefore say a few words about Coase’s 1960 paper before I present my general critique of rights-talk.

Coase’s paper was about the problem of harmful effects, such as air pollution and cattle trespass, and the paper explains why these harms are always “reciprocal” ones. To see why, imagine a cattle ranch next to a wheat farm. According to Coase, whenever we witness an infringement of property rights like cattle trespass, that infringement (and the resulting harm generated by the infringement) is actually the result of decisions made by both parties, the rancher (the owner of the stray cattle) and the farmer (the owner of the damaged crops). Simply put, both the wrongdoer (the rancher) and the victim (the farmer) are to blame for the resulting harm, since either of them could have taken steps to avoid or reduce the cattle trespass problem in the first place. Either party could have erected a fence to protect the crops. Or the rancher could have chosen to raise sheep or goats instead of cattle. Or the farmer could have chosen to grow a cattle-resistant crop instead of wheat. The real question, then, is not who is to blame–either morally or legally–for the damaged crops, since both parties made decisions that generated the harm, according to Coase’s reciprocal analysis. Instead, the real question is a more prosaic or practical one: who should pay the costs of avoiding the harm.

So, what does Coase’s economic analysis of cattle trespass and reciprocal harms in his 1960 paper have to do with moral or legal rights? I will explore this essential relation in my next blog post … 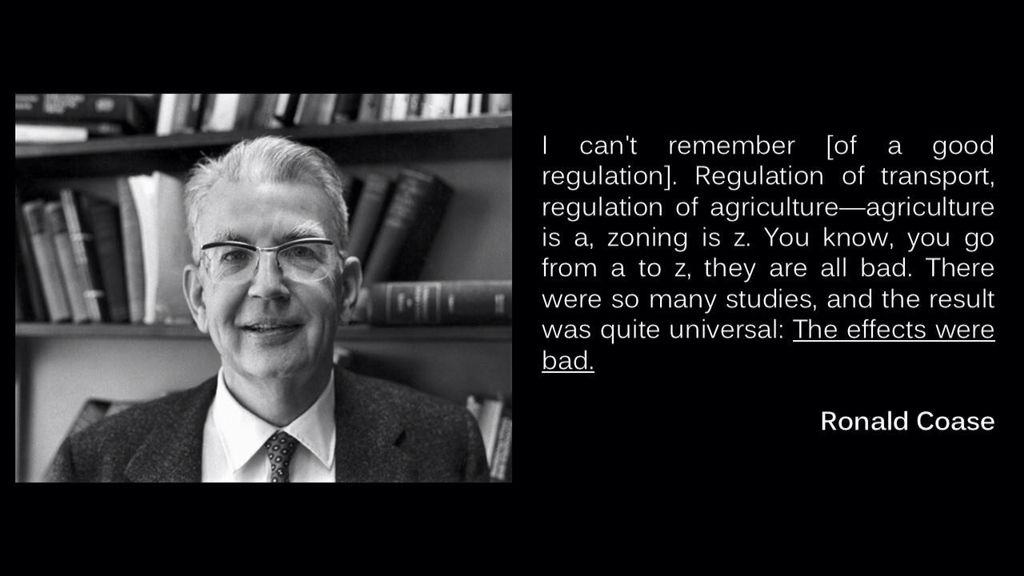 2 Responses to A Coasean critique of rights-talk (review of Chapter VIII, part 1)