Professor Finnis compares and contrasts two major types of “obligation” in subsections three and four of NLNR: moral duties, such as the general moral duty to keep one’s promises, and legal duties, such as the general legal duty to perform one’s legally-binding contractual obligations. According to the learned professor, both types of duties embody social practices that help promote the common good (i.e. both are methods of promoting cooperation and solving collective action problems), but the main difference between moral and legal duties is this: moral duties are variable, while legal duties, by contrast, are invariant.

Consider the general moral duty to keep one’s promises. From a moral perspective, the binding force of promises is often feeble at best, or as Finnis himself correctly notes (p. 308-309): “… the obligation of promises is very variable, and is often quite weak. … a promise is usually an exclusionary reason that can be defeated by some countervailing reasons, often by a wide range of readily available reasons,” such as an unforeseen change in the circumstances of one or both of the parties. Legal duties, by contrast, are formally invariant, for the binding force of legal duties is “black-and-white” (p. 312, p. 314), or in the words of Finnis, “There are, legally speaking, no degrees of legal obligation ….” (p. 309).

For my part, Finnis’s point about the degrees of obligation really captured my imagination, but is Finnis’s tidy picture of variable or mutable moral duties and invariant or all-or-nothing legal duties completely wrong? In short, isn’t it the other way around? For instance, aren’t moral duties–particularly from a Kantian perspective–supposed to be categorical, invariant, and universal, and by contrast, aren’t legal duties generally weak and ineffectual (when was the last time you saw anyone driving under the speed limit?), especially given the costs and vagaries of enforcing legal duties?

There are thus two gaping holes in Finnis’s analysis of legal and moral duties. One defect is theoretical: Finnis’s abject refusal to engage the ideas of ‘law-and-economics.’ Simply put, from a theoretical or ‘law-and-economics’ perspective, one would expect the actual efficacy of legal or moral duties to depend not on some abstract theory of obligation but rather on two key variables: the probability and severity of punishment. Worse yet, Finnis ignores two key features of all real-world legal systems. One is the reality of prosecutorial and public agency discretion. Many (most?) laws and regulations are under-enforced, since public prosecutors and regulatory agencies lack sufficient resources to apprehend or prosecute all law-breakers. The other key feature that Finnis doesn’t even mention is the fact that most legal duties are privately enforced via civil lawsuits, and the enforcement of such private wrongs, like torts and breaches of contract, is uneven and variable.

There is an additional anomaly in Prof Finnis’s analysis of legal duties, for Finnis draws a further distinction between one’s legal obligation to obey the law and one’s moral obligation to do so (p. 318, emphasis in original): “Like the obligation of promises, the moral obligation to obey each law is variable in force. It will vary according to the subject-matter of the law and the circumstances of a possible violation; for some subject-matters are in greater need of legal regulation than others, and some violations of law make a greater rent in the fabric of the law than others.” Wait, so we now get to pick and choose which laws we want to obey? But perhaps the biggest problem with Finnis’s analysis of moral and legal duties thus far is that his theory is completely untestable. His claim about the invariance of legal duties might be true in some ideal world or at some level of generality, but there is no way of testing the truth of this claim. In sum, since most offenses go undetected and since so few laws are fully enforced, what difference, if any, does the invariance of legal duties make in practice? Hardly any … I am beginning to think that if I want to defend natural law and natural rights (which I do!), I am going to have to start from scratch and do the job myself. Before we attempt such a Sisyphean task, however, we will proceed to subsection XI.5 of NLNR in our next post. 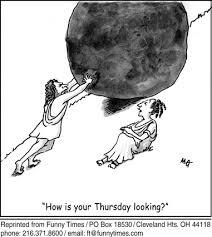