In a previous post, I posed the following moral paradox: when is an illicit promise morally binding? In my next few posts, I will present three concrete examples of illicit promises: (1) usurious payday loans in the case of Buckeye Check Cashing, Inc. v. Cardegna, (2) Shylock’s pound-of-flesh pact in Shakespeare’s Merchant of Venice, and (3) a modified version of the prisoner’s dilemma in which the prisoners promise to obstruct justice. This third example of an illicit promise is inspired by the famous prisoner’s dilemma, a simple mathematical model that has been used by game theorists and others to model a wide variety of situations involving conflict and cooperation. (See e.g., Robert Axelrod, The Evolution of Cooperation, revised edition, Basic Books, 2006.) The first published account of the prisoner’s dilemma appears in Duncan Luce and Howard Raiffa’s 1957 game-theory treatise Games and Decisions. In their treatise, Professors Luce and Raiffa present the now standard one-shot version of the Prisoner’s Dilemma as follows:

Two suspects are taken into custody and separated. The district attorney is certain that they are guilty of a specific crime, but does not have adequate evidence to convict them at trial. He points out to each prisoner that each has two alternatives: to confess to the crime the police are sure that they have done, or not to confess. If they both do not confess, then the district attorney states he will book on some very minor trumped-up charge such as petty larceny and illegal possession of a weapon, and they will both receive minor punishment; if they both confess they will both be prosecuted, but he will recommend less than the most severe sentence; but if one confesses and the other does not, then the confessor will receive lenient treatment for turning state’s evidence whereas the latter will get “the book” slapped at him. (Luce & Raiffa, 1957, p. 95.)

Stated in game theory terms, the prisoners in this not-so hypothetical scenario must decide whether to “defect” by turning State’s evidence or whether to cooperate with each other by not confessing to the authorities. Now, let’s add the following modification to this model: what if the suspects in this dilemma had previously promised to each other not to defect? Or more dramatically, what if the suspects have promised to obstruct justice, i.e. give the police false information? (For your reference, here is the complete text of the federal obstruction of justice statute.) Although game theory teaches us that the payoff structure of the one-shot version of the prisoner’s dilemma (as opposed to the “iterated” or repeat version of this game) will impel the suspects to defect even if they have promised each other to do otherwise, what can we say about the moral status of mutual promises to remain silent or obstruct justice in this modified version of the prisoner’s dilemma? In short, wouldn’t such a solemn set of promises be morally binding on the prisoners of this famous dilemma? Put another way, regardless of the prisoner’s dilemma perverse payoff structure, what moral duties, if any, does a promise to remain silent or a promise to obstruct justice generate? Stay tuned. I will present another example of an illicit promise in my next post. 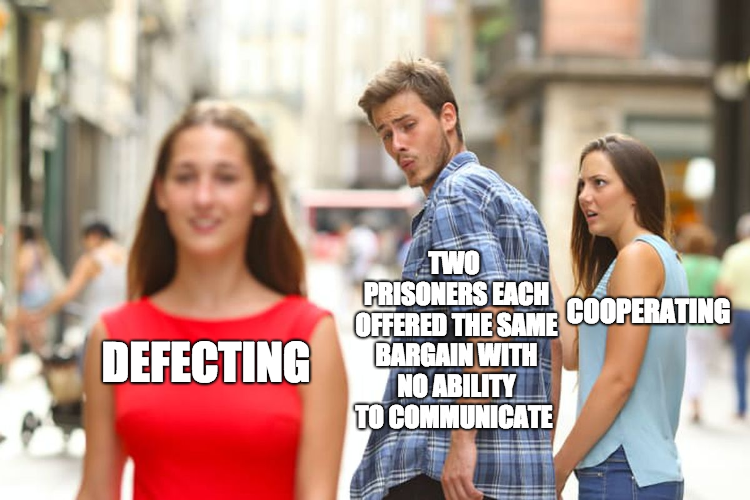 2 Responses to Promises to obstruct justice