Should jury verdicts be unanimous?

What about the decisions of the Supreme Court of the United States (SCOTUS)? The case of Ramos v. Louisiana, which was argued before the Supreme Court yesterday (7 Oct.), poses these questions and many more, including questions involving stare decisis (when may a court disregard or overrule its own precedents?) and the common law background of the Constitution (what parts of the common law are enshrined in the Constitution?), issues that I will discuss in my next few posts.

In any case, because of my fascination with juries and our common law jury system, with the rule of stare decisis, and with our nation’s constitutional history, I attended the oral arguments in Ramos v. Louisiana. Amy Howe’s analysis of how the arguments in this case played out is very good (see here), but there is one thing she left out. At one point during the petitioner’s oral argument, Chief Justice John Roberts posed a fascinating question. I will rephrase his question as follows: if you were accused of a crime and your case went to trial, which of the following options would you prefer?

(a) a six-man jury with a unanimity requirement to convict,

(b) a 12-man jury with a three-fourths super-majority requirement, or

(c) a 24-man jury with a two-thirds super-majority requirement? 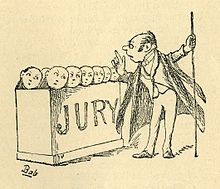 2 Responses to Should jury verdicts be unanimous?