In a previous post, I mentioned that I would elaborate on my Coasean approach to the current pandemic. So, here it goes. To begin with, when my fellow legal scholars hear the words “Coase” or “Coasean”, most of them immediately conjure up something called the “Coase Theorem.” This so-called theorem has been formulated in many different ways, and I myself have written several scholarly papers about it, but guess what? We don’t need to go into the details of Coase’s influential theorem for this post. Instead, I am going to refer to another aspect of Coasean thinking, one that is often neglected but that is far more important. Specifically, I am going to focus on Ronald Coase’s revolutionary insight that most moral conflicts or legal disputes are “reciprocal problems.”

Full disclosure: along with Robert Nozick, Ronald Coase is one of my intellectual heroes, and years ago, I explained the theoretical significance of Coase’s counter-intuitive idea in the inaugural issue of the Indian Journal of Law & Economics, which is available here. For now, we can illustrate this idea with COVID-19. Simply put, how is COVID-19 a “reciprocal problem”? To see why COVID-19 is a reciprocal problem, let’s take a look at this essay by Graham Mooney, a historian of public health at John Hopkins University. (FYI: Professor Mooney’s excellent essay was published in The Atlantic and featured on Jason Kottke’s blog earlier this week.) Among other things, Professor Mooney makes two observations:

Many of the people pushing to reopen see the issue in terms of freedom. They argue that quarantine and government-mandated closures infringe on their individual rights to do as they please, to make their own choices about health risks. The United States was founded on the idea that individual liberty … is inviolable, and for many of its residents this argument resonates deeply.

In response to these vehement appeals to individual freedom, public-health leaders in [19th Century England] and elsewhere developed a powerful counterargument. They too framed their argument in terms of freedom—freedom from disease. To protect citizens’ right to be free from disease, in their view, governments and officials needed the authority to isolate those who were sick, vaccinate people, and take other steps to reduce the risk of infectious disease.

These two observations show us why COVID-19 is a reciprocal problem. Professor Mooney’s mistake is to assume that Observation #2 somehow trumps Observation #1, while “Red State Republicans” commit the opposite fallacy. In reality, both of Mooney’s observations are equally true, or to put it in Coasean or economic terms: allowing people the freedom to congregate in close quarters during a pandemic generates a harmful effect or social cost. The disease is more likely to spread and infect many more people in the absence of quarantines, business closures, and other aggressive public health measures. But at the same time (paging Dr Mooney), these aggressive health measures also generate a harmful effect, since such measures reduce our liberties and, in many cases, our livelihoods as well!

So, what is to be done? Coase’s solution has two steps. The First Step is to realize that most, if not all, harms are reciprocal problems. But that is only the first step. The Second Step is to figure out which of these two competing harms is the lesser evil. Of course, the Coasean rub is that it is not always obvious what the lesser harm is. COVID-19, for example, is a case in point. With all due respect, however, Mooney’s mistake is to assume away or ignore the costs to liberty. The Coasean approach, by contrast, invites us to measure and weigh the harms on both sides. Change my mind! 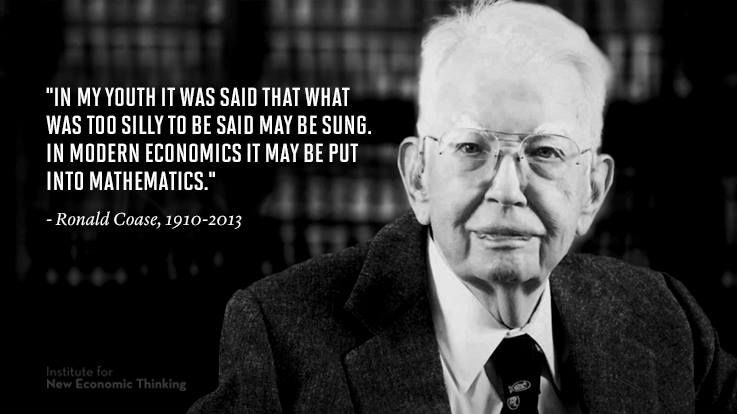