In my previous post, I referred to Ronald Coase’s classic paper “The Problem of Social Cost” and introduced the nucleus of the so-called “Coase Theorem.” Here, I will discuss its philosophical implications. To begin with, when Coase is saying that the problem of harmful effects is a reciprocal one what he means is that in any legal dispute one side to the dispute will suffer “harmful effects” no matter how their dispute is decided. On the one hand, if we permit the owner of the factory to continue to emit smoke (to borrow Coase’s own example), the neighbors will be harmed. If, however, we rule in favor of the neighbors, then the owner of the factory will be harmed. (In the latter case, by the way, it is not just the owner of the factory who will be harmed but also all consumers who wish to purchase the products produced by the factory.)

On one level, then, Coase is simply making a practical point about trade-offs. One must weigh and balance (a) the cost to the neighbors caused by the emission of smoke versus (b) the cost to the factory owner and to consumers that will be caused by preventing the emission of smoke. But at a much deeper level, Coase, perhaps unwittingly, discloses a profound and counter-intuitive insight, for his approach implies that neither party to the dispute has an ex ante right to be free from harmful effects. To say, for example, that the owner of the factory has a right to use the factors of production free from legal or government intervention is not dispositive because one could argue that the neighbors have a right to clean air or to good health. In other words, however we frame the problem–as one involving property rights in the factors of production or moral rights to good health–the problem remains reciprocal. One of the parties will suffer harmful effects however the dispute between them is resolved!

For Coase, then, the key question is not, Who is harmed? Both sides are! Nor is it, How do we avoid harm? For harm is unavoidable. The key question, then, is, How do we decide which side to harm? Now that we have stated the key question in terms of choosing the lesser harm, allow me to conclude with a brief digression regarding John Stuart Mill’s famous “harm principle.” In Mill’s immortal words in his essay “On Liberty”: “The only purpose for which power [i.e. law] can be rightfully exercised over any member of a civilized community, against his will, is to prevent harm to others.” But in reality, Mill’s harm principle is incoherent. It is just empty rhetoric, meaningless banter. Why? Because as Coase has taught us, harm is unavoidable. So, to say “do no harm” or “your right to swing your fist ends where my nose begins” is totally unhelpful. Instead, we should ask, what legal rule or course of action produces less harm … 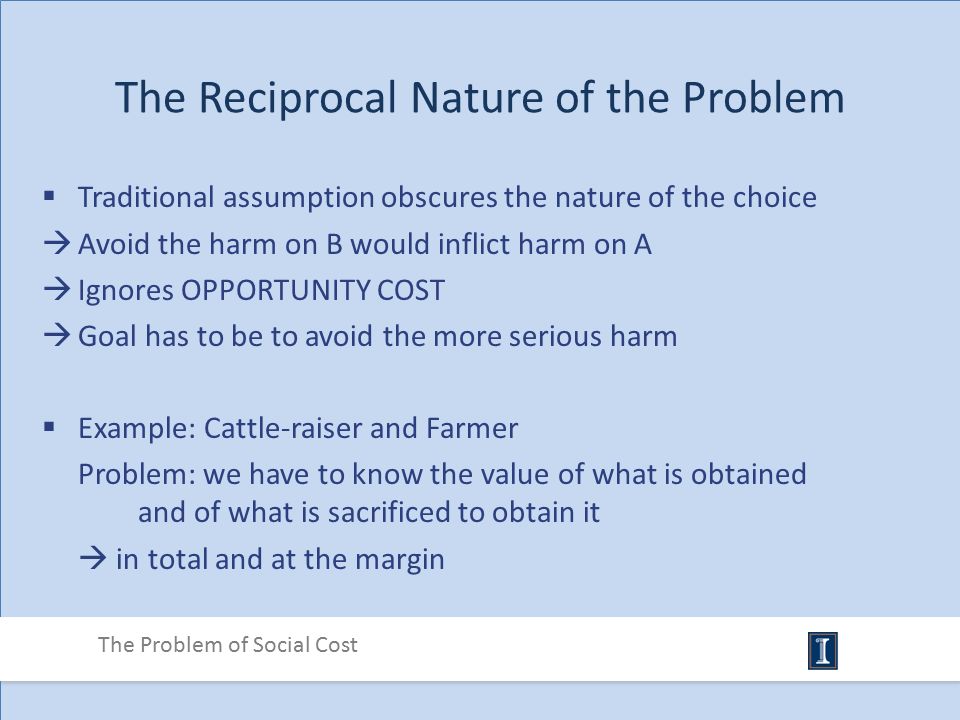