Note: This is our penultimate post on Allen & Pardo’s paper “Relative plausibility and its critics.”

On the subjective probability view of proof, a juror’s decision is like a bet on which party is telling the truth about the facts of the case. So, let Pr(∏) be the probability that the plaintiff is presenting the truth about the facts of case A, and let Â be the probability space containing all possible outcomes of case A, e.g. jury verdicts going 12-0, 11-1, 10-2, etc., or jury verdicts going 6-0, 5-1, 3-2, etc., depending on the composition of the jury. (Recall that most verdicts are collective decisions in Anglo-American trials with 12-man or 6-man juries.)

By a bet on ∏ ∈ Â we mean a contract between a bettor and a bookie whereby the bookie agrees to pay the bettor the amount $a if the plaintiff prevails and the bettor agrees to pay the bookie the amount $b if the defendant prevails. The stake of this bet is the sum $(a + b), and bettor’s odds is the ratio a ⁄ b. If Pr is the bettor’s subjective degree of belief function, the expected monetary value of the bet to him is [$a × Pr(∏)] − [$b × Pr(1 − ∏)].

Why is the Dutch Book Theorem relevant to the literature on juridical proof? Because subjective beliefs that are logically coherent–i.e. that conform to the axioms of probability–are more likely to be accurate. (See Joyce, 2009; Williams, 2012.) The same, however, cannot be said for beliefs held under Allen and Pardo’s less demanding relative plausibility theory. Why not? Because the relative plausibility approach is susceptible the unknown probability space problem. Allen and Pardo not only “reject the assumption that the plaintiff’s explanation [in civil cases] must fill more than half of the possible probability space” (Allen & Pardo, 2018, p. 26); by their own admission, their theory of relative plausibility does not require the competing explanations of the evidence to add up to 1. Consider Allen & Pardo’s own preferred example, “where a [juror] concludes that a plaintiff’s explanation is 0.4 likely and a defendant’s explanation is 0.2 likely….” (Ibid.) Last we checked, 0.4 + 0.2 = 0.6, so what about the remaining 0.4 probability? It’s getting Dutch booked by creative trial lawyers!

To sum up, although numerical values are not needed to operationalize a subjective probability account of proof, one of the advantages of the subjective approach is that it is more logical and mathematically rigorous than Allen and Pardo’s relative plausibility theory. In addition, as we have mentioned in a previous post, the other major problem with Allen & Pardo’s approach is that they neglect the collective nature of jury voting. In our next post, our final one in this series, we will explain why the collective nature of jury voting lends itself to a subjective or Bayesian view of proof.

B. Paris, “A note on the Dutch book method,” in The Proceedings of the Second International Symposium on Imprecise Probabilities and Their Applications, Shaker Publishing (2001), pp. 301-306. 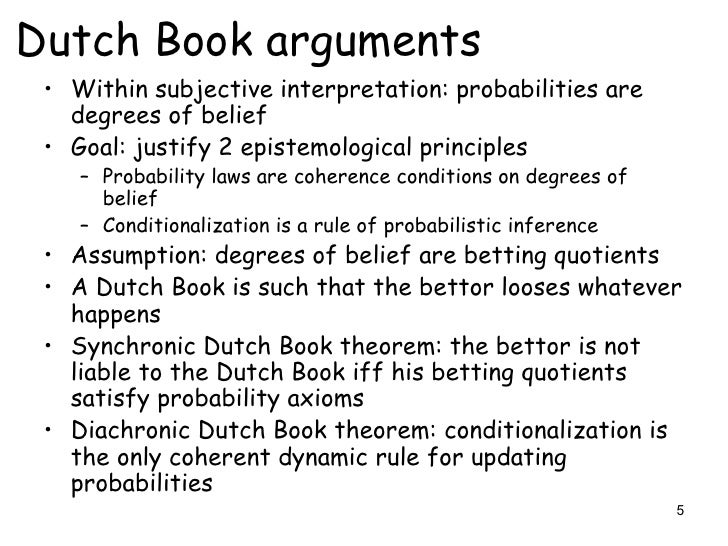