Let’s continue with our survey of illicit promises. Thus far, we have seen examples of legal but immoral agreements (such as slave trade contracts under Imperial Spain’s asiento system) as well as of illegal but moral agreements (such as usurious payday loans). Here, let’s focus on agreements that are illegal and immoral. Consider, by way of example, the actress Felicity Huffman, who pled guilty in federal court to one count of “conspiracy to commit mail fraud” for paying a college admissions consultant $15,000 to have a proctor correct her daughter’s answers on the December 2017 SAT entrance examination. (The relevant facts are alleged here.) In other words, Huffman entered into an illicit agreement, one that was not only illegal under federal law (mail fraud) but also immoral, since her daughter received an unfair advantage over other test takers. By the way, why wasn’t her husband charged, and why isn’t the public allowed to see Ms. Huffman’s mugshot? Why do the wealthy get so many special privileges not afforded to run-of-the-mill criminal suspects? 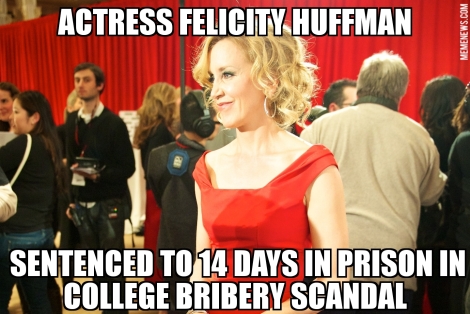 And she served only 11 days of her sentence.

1 Response to Illegal and immoral