As soon as I heard about Patrick Collison and Tyler Cowen’s recent call for a new field of “progress studies” (Collison & Cowen, 2019, available here), my initial reaction was one of deep skepticism. Simply put, I mistrust our collective ability to discover, let alone implement, a reliable recipe for boosting long-term economic growth or for promoting ever-higher levels of human flourishing generally. But my skepticism poses a deeper, second-order question: is this mistrust warranted, or is it the result of my own Burkean and Humean biases or what Cowen likes to call “mood affiliation”? It turns out that I am not the only one to be skeptical of the concept of progress. Matthew Slaboch, a research fellow at Princeton, has devoted an entire scholarly tome (whose cover art is pictured below) to this question.

As Slaboch explains in his introduction, his book is organized temporally and geographically. Slaboch devotes the first three chapters of his book to the leading critics of progress in the 19th century: the German philosopher Arthur Schopenhauer (ch. 1), the great Russian author Leo Tolstoy (ch. 2), and the New England historian Henry Adams, the great grandson of President John Adams (ch. 3). Next, Slaboch surveys the ideas of a trio of 20th-century anti-progress intellectuals (ch. 4) and then concludes with his own thoughts about the nature of progress. Because Slaboch’s excellent survey is so compact and concise–spanning only four chapters–I will resist the temptation to cover the same ground as previous reviewers of Slaboch’s work, such as Daniel Eisenberg and Inder Marwah. In place of a comprehensive review, I will instead share a few of the most surprising or counterintuitive ideas I learned from Slaboch’s beautiful book, starting with the introduction.

To begin with, when we think of “progress,” we may often have in mind economic or moral forms of progress–the accumulation of material comforts or expanding notions of moral and human rights. Are we not becoming more prosperous as measured by the Economic Holy Grail of GDP; are we not making moral strides in terms of animal rights, gender and racial equality, the prosecution of war crimes, etc.? One of the most unexpected ideas I got from reading the introduction, however, is that we should also think about progress along a spatial dimension. Specifically, is progress a universal concept, an ideal that transcends any particular time and place, or is it a mere Western or cultural construct, inseparable from one’s time and place?

Another powerful idea that appears in Slaboch’s survey is Schopenhauer’s “doctrine of the unceasing will.” (Slaboch presents this idea on p. 18 & pp. 56-57 of his book.) Or, in the immortal words of Schopenhauer himself (p. 18), “we yet always have before us only the same, identical, unchangeable essence.” In other words, people are basically the same, for our wants, needs, and desires are insatiable. Furthermore, even when we’re able to satisfy our human cravings (whatever these sundry appetites may consist of), our happiness will be fleeting, for as Slaboch explains (p. 18), summarizing Schopenhauer’s critique of progress, “almost as soon as a desire is met, boredom arises, and it remains until we have some new end to pursue.” This insight is the foundation of Schopenhauer’s “metaphysical pessimism” (p. 19) and of his philosophical critique of the idea of progress (p. 20): no matter how much material prosperity we might achieve or enjoy, we will always end up wanting more!

Yet another surprising tidbit I learned from Slaboch’s survey is Leo Tolstoy’s admiration of Schopenhauer. In fact, Tolstoy so revered the German philosopher that he hung a portrait of Schopenhauer in his private study. For Tolstoy, however, progress was not only a futile pursuit; it was also a dangerous one. As Slaboch explains (p. 58), summarizing Tolstoy’s critique of progress, “European elites terrorized not only far-off populations, but also exploited their own countrymen in the name of progress ….” To my mind, Tolstoy’s critique of the dangers of progress is still valid today: the pursuit of moral progress often leads to overzealous efforts to shape or mold man’s character, and once progress becomes a public ideal or a political imperative (as opposed to just an individual one), great crimes will inevitably be committed in her name, regardless of who is in charge, i.e. monarchs, revolutionaries, classical liberals, etc.

But perhaps the most original idea I learned from Slaboch’s survey (especially Ch. 3) is what I will call “the paradox of the anti-progress canon.” I will delve into this paradox in my next post … 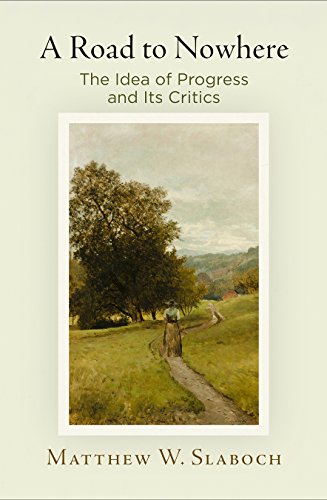