As we mentioned at the end of our previous post, smack dab in the middle of one of the most original and mind-blowing thought experiments in the history of political philosophy, Nozick digresses to discuss Locke’s views on parental ownership of children. Although the ostensible reason for this Lockean digression is to figure out whether children are to be included in Nozick’s imaginary “one-shareholder, one vote” scheme, we suspect that the true reason for tucking this digression away in this part of the book might be a more sinister one: to conceal some serious internal contradictions in Locke’s labor theory of property rights.

Why would Nozick want to conceal, or at least minimize, these internal contradictions? Because the entire edifice of Nozick’s entitlement theory of justice in general and his defense of the minimal state in particular are built on Lockean foundations. Specifically, Nozick’s entitlement theory is premised on Locke’s sweat-equity theory of property. According to Locke, the ultimate source of property rights is one’s labor. Locke’s axiom is that one is entitled to (i.e. has a natural property right to) the fruits of one’s labors. The general idea is this: if you make something out of materials you already own or are otherwise entitled to use, then it’s yours. But what about children? Are children to be included in Locke’s conception of property-rights acquisition? After all, to the extent parents biologically “make” their children and expend a lot of time and effort in rearing them, the Lockean conclusion is inescapable: parents must therefore own their children. Locke, however, rejects this conclusion out of hand and gives at least two possible reasons why parents don’t own their own children:

“If the point is that people cannot own their children because they themselves are owned [by God] and so incapable of ownership, this would apply to owning everything else they make as well. If the point is that God, far more than a child’s parents, is the maker of a child, this applies to many other things that Locke thinks can be owned (plants, nonhuman animals [and land]); and perhaps it applies to everything.”

In other words, not only are Locke’s arguments unpersuasive and untestable; those arguments also have the unintended effect of undermining his own sweat-equity conception of property rights! Nevertheless, Nozick (like Locke) is not prepared to concede that parents own their children. Even in his imaginary “one-shareholder, one vote” world, a world in which human corporations are eventually consolidated into one “Great Corporation,” Nozick ends up stipulating (on page 289 of ASU) that children will be allowed to decide for themselves (presumably upon reaching the age of majority) whether they wish to join this collective corporate entity. But this concession now poses a new problem: holdouts. Specifically, how should the Great Corporation deal with persons who refuse to participate in this grand scheme? We will address the holdout problem in our next post. 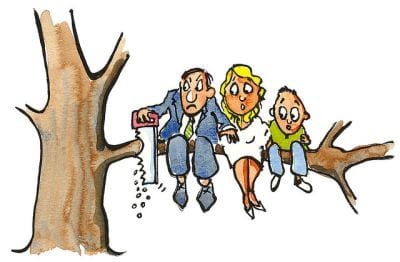